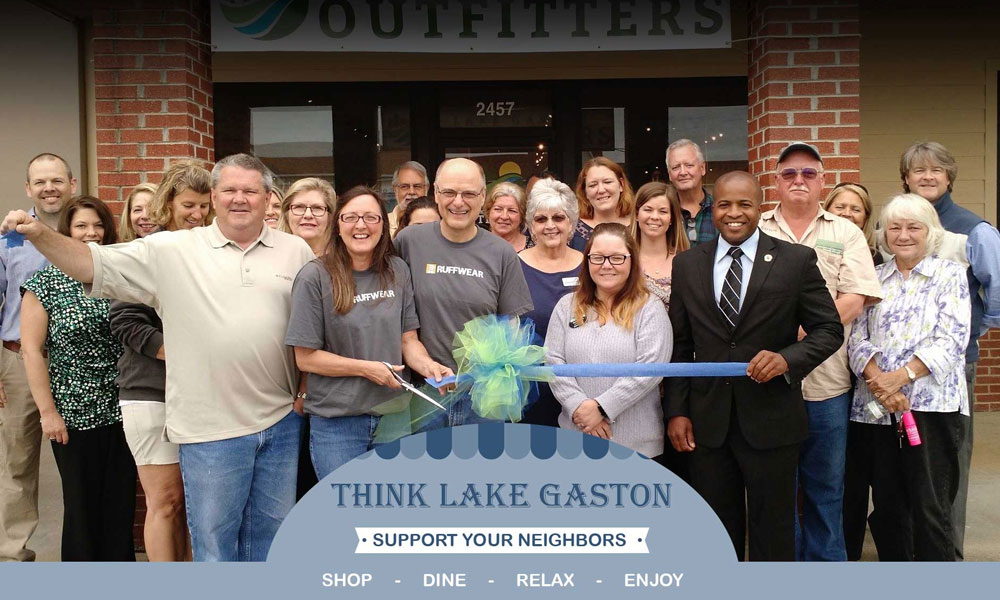 The businesses and citizens of the Lake Gaston region genuinely care about our communities, our non-profit organizations, civic clubs, churches and other citizens in need. I have witnessed this deep level of caring many times during my two-year tenure here at the Lake Gaston Regional Chamber of Commerce, but I had another opportunity to experience this community outpouring on Sunday.

I am on the board of directors for C.A.R.E./The John 3:16 Center, and I, along with my daughters and dear friend and her daughter, attended the Gospel Music Fundraiser for the center at Lakeland Theatre Company. Produced by Lakeland volunteer George Kimble and directed by Lakeland volunteer Nancy Grueneich, the group of performers they put together was amazing. The emcee was Reverend Stan Lewis, also a C.A.R.E./The John 3:16 Center board member, who provided the perfect opening and closing for the show.

Twice during the show an octet performed, featuring Kimble and Grueneich, as well as such notable figures as Moira Underwood of the Lake Gaston Association and Don Heagren, one of the Lakeland Singers. Other octet members were Diane Colin (member of Lakeside Lutheran Church), Hayleigh Stallings (a student of the Music School of Roanoke Rapids who also later performed a solo), David Hartline (member of Lakeland Singers and Lakeside Lutheran Church), and Al Murrell (Lakeland Theatre volunteer).

In addition to performing with the octet, Underwood, Kimble and Grueneich performed several solos and were absolutely fabulous. I loved Kimble’s deep, resonant voice when he performed old favorites like “Just a Closer Walk with Thee” and “Precious Lord.” Underwood, as one might imagine, had a trilling soprano and her vocals carried like butterflies when she sang “The Gospel of Grace,” her tribute to our military “Battle Hymn of the Republic” (one of my favorites), “Give Me Jesus,” and “Bright and Beautiful.” Grueneich exuded a soothing alto voice in her renditions of “Me and God” (an upbeat, folksy song that I had not heard before), “Heaven Came Down,” and “Whispering Hope.”

There were some other special musical talents on the stage, including Colin and Katie Ammann of the Music School of Roanoke Rapids who performed two flute duets and Ms. Bonnie’s School of Dance Praise Team who did a beautiful praise and worship dance. With C.A.R.E./The John 3:16 Center’s focus on the family, I particularly enjoyed performances by father Jason Patterson and his young daughter Avery, both members of Lake Gaston Baptist Church. Jason did two fantastic solo performances and a moving duet with his daughter. Surprisingly, young Avery, age 9, also sang a solo and did so remembering all of the lyrics and with perfect tempo.

Liz Johnson, wife of retired General Dave Johnson of the Lake Gaston Lion’s Club and Roanoke Valley Veteran’s Museum, is a member of Lake Gaston Baptist Church and regular Lakeland volunteer, most often working behind the scenes with costumes. I had never heard Liz perform. She did two solos, both of which blew me away! Her tribute to soldiers – “Another Soldier’s Coming Home” – was so moving, as was her performance of “May I Be His Love.”

Other volunteers who assisted with the production were Peggy Kimble (stage manager), Ammann (director of music) and Janice Thompson (accompanists), John Colin and Gavin Guttersen (lights and sound), Moira Underwood (publicity), Mary Ann Whittemore (advisor), Janet Duvall (show board), and Grueneich and Ruth Morgan (set design). Thanks to Lakeland and these many talented musicians for caring about C.A.R.E./The John 3:16 Center.